Researcher Sanyam Jain at GDI foundation discovered eight unsecured databases exposed online that contained approximately 60 million records of LinkedIn user data. Most of the data are publicly available, the databases also include the email addresses of the users. The databases also contain internal data, such as the type of LinkedIn subscription a circumstance that suggests that the source could be a data breach. Records include LinkedIn public profile information, including IDs, profile URLs, work history, education history, location, listed skills, other social profiles, and the last time the profile was updated.

The archives contain 229 GB of data, each one containing between 25 GB and 32 GB of information.

The researcher noticed that the huge trove of data was disappearing and reappearing online under different IP addresses every day.Finally, the database was no more accessible likely because it was secured.

The mystery behind this discovery is that some users claim to have had
LinkedIn privacy setting configured to avoid publicly displaying some personal details.

“Included in the profile was also my email address that I used when registering my LinkedIn account. It is not known how they gained access to this information as I have always had the LinkedIn privacy setting configured to not publicly display my email address.” reads the post published by BleepingComputer.

“After reviewing the data that was sent to me, I found all of the information to be accurate.” 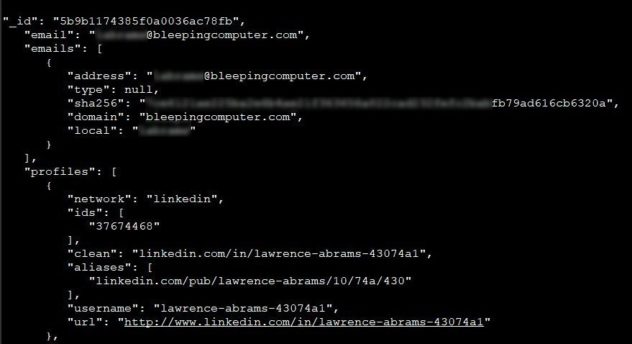 At the time it is not clear who is the owner of the database, as of Monday, the databases were no longer accessible online.

Paul Rockwell, head of Trust & Safety at LinkedIn, told BleepingComputer that the databases do not belong to them, anyway he confirmed that the company is aware of third-party databases containing scraped LinkedIn data.(SA)

For an audit, a pentest or software creation, ask for a quote.